Short Walks Around a Pub

click here to print off the OS map with route marked 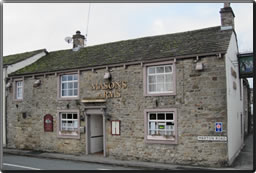 Open all day
please refer to website for details.
Whilst this area does not belong to the Forest of Bowland it is so close by to warrant an inclusion. Nevertheless even so the rolling hills of Craven are worth a visit.
The walk itself is relatively easy. From East Marton to Gargrave over beautiful open countryside it follows the Pennine Way. The return trip mainly follows the Leeds & Liverpool Canal. At 6.76 miles this is a little longer than intended for a short walk but the going is relatively easy.
The Masons Arms is found in Gargrave.
Please note that The Old Swan Inn in Gargrave is permanently closed, and that The Cross Keys in East Marton is also closed. 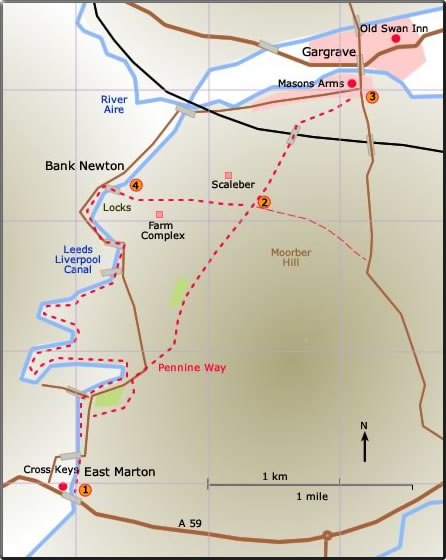 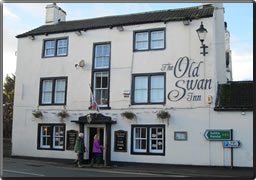 Best to start the walk by the side of The Cross Keys. The path goes through the cottages and horse farm complex, over the canal bridge, and then follows the road to Trenet Laithe. The waymarker for the Pennine Way is seen on the left. From here on the path is well waymarked. The walker will encounter a wooden foot bridge, and a series of small metal gates on the way to the signpost at

From the signpost carry straight on towards the bridge crossing the railway; St Andrew's Church in Gargrave can be clearly seen dead ahead. 25 yds after the bridge the sign for the Pennine Way points to the right over the field. The path ends close to the church at Church Street. Turn left for the Masons Arms. (25 min)

where the path now turns due west. The path is through pasture and takes the walker through a series of three single gates. At the final double gate follow the farm track down to the canal and the lock gates at Bank Newton. 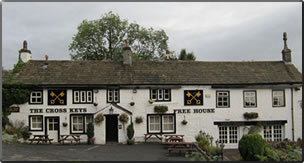